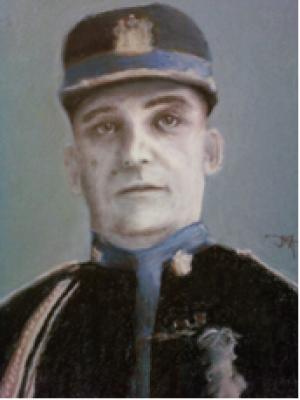 Born on 1 November 1892 in St. Johann, Saarbrücken, Rheinland province. His parents are Stephan Steinlein and Catharina Rehn. They lived in the Grünstrasse 4 in St. Johann. Father Stephan was assistant stoker with the railway company.

From August 1914 Jacob is Tsingtao soldier in the 2nd company of the 3nd sea battalion. He becomes prisoner of war in the Bando camp and possibly other camps in Japan. Prisoner number 2069. He indicates Saarbrueke 3 as his home address in Germany.

Upon his release, he opts for a new life in the Netherlands East Indies. In 1922 he is assigned as main police officer in Kudus (Java). In 1935 he is posted as police inspector in Semarang (Java). He lives in the Gemelaan (?) nr. 16. In 1940 he is re-posted in Madiun (Java) where he is arrested.

On 14 April 2011, Jaclyn (graphic designer, Hampton Roads, VA, USA, then in her early twenties) reports on her discovery that Jacob Steinlein is the father of her grandfather. Fascinated by this family history, she delves deeper in historical records and publishes the findings on her website: http://neutralocean.blogspot.com.es/2009/11/van-imhoff-portrait-for-my-opa-and-oma.html.