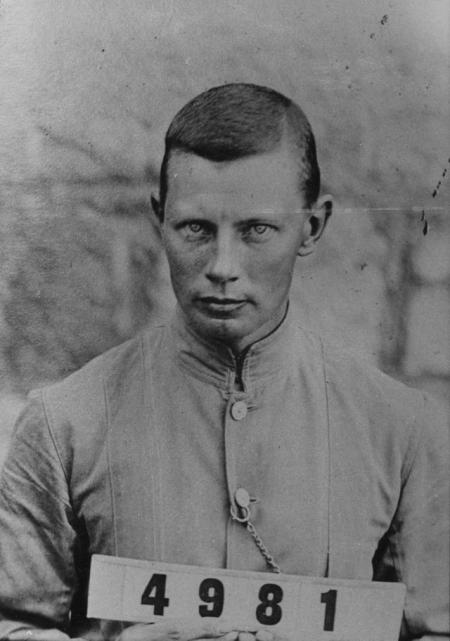 Hans Overbeck became known in many professional qualities: merchant, linguist, ants specialist, malayologist. He was the ex-CEO/director of Behn, Meyer & Co. in Jogyakarta.

Overbeck's biography is fascinating and yet another example of how successful German immigrants were in NEI.

In this picture, Overbeck is seen in prison uniform following his arrival in Sydney on 17 April 1915. He was incarcerated as an enemy alien by the British authorities from 1914 to 1919. He was imprisoned in Singapore, then at Holsworthy (Liverpool) and later in the Trial Bay internment camps in Australia.

This is one of only 4 known images that remained in the family. The personal effects of the Overbeck family were destroyed in Java and Bremen during WW2.

Prior the First World War Hans Overbeck was a manager with the German trading house Behn, Meyer and Company, based in Singapore.

When arrested as unwanted German in NEI, several witnesses recall that a close friendship developed between Hans Overbeck and artist Walter Spies during their internment in Sumatra. There, both were moved to the "traitors" section of the Kuta Cane camp as they had openly declined the Nazi ideology. Perhaps they knew each other already from before the war. During the sinking of the Van Imhoff they distanced themselves from the turmoil and sat close together, accepting their destiny.

Biographic:
Wilfried Wagner, Wilfried - Adventures into the Soul of the Malays. Hans Overbeck 1882-1942.

(author?) The orientalist Hans Friedrich Overbeck 1882-1942: his entomological work, prisoner-of-war experiences and known photographic images. In: Journal of the Malaysian Branch of the Royal Asiatic Society, Vol 87, No. 1 (306), June 2014, pg 37-51